In July 2018, as part of an Architecture and Urbanism Writing Workshop in Accra, I explored the Balme Library at the University of Ghana with Emmanuel Owusu Banahene (an MPhil student at KNUST), Victoria Okoye (an Architecture PhD student from University of Sheffield), and Benedict Acheampong (an undergraduate student studying Architecture at KNUST). This was my first time visiting this library, and it opened me to a new learning experience.

In this article, I consider adaptation as changes to space or building to fit the current needs and usage of its users, using the University of Ghana’s Balme Library as an example. The Balme Library is an example of a structure whose local adaptations of structure respond to societal, economic and environmental changes. Adaptation of buildings to users and uses is emerging as one of the primary requirements in sustaining the performance and lives of buildings.

Historical background of the Balme Library

The Balme Library is the main library of the University of Ghana and centrally located in the university campus. It is a neo-classical masterpiece building with high adaptability and named after the first Principal of University of Ghana, David Mowbray Balme. From the library, I could see the academic area, student’s residences, and the main avenue among others. The location of the library makes it accessible from all directions. Geographically, it is located on latitude 5°39’ 7.054 “N and longitude 0°11′ 13.444″E with an overall elevation of 107 meters. The precursor to the library was a large room in Achimota, which was used until the library was established in 1948 (Bani, 2003). The then facility was a large room with no space for expansion, and the current library structure was built in 1959 (ibid). The new structure then had a capacity for 250,000 books and seating space for 300 persons. The central location of the library with its facilities and the scope of the coverage of the collection make it an essential and vital part of academic life on campus. It exists as a central organ of the university, around which other structures are built (Thompson and Carr 1987).

During our initial transect walk around the library, I noticed the symmetrical nature of the building, like most libraries I have experienced in the past. I also noticed the introduction of new elements to the building since its initial construction: sliding windows, air conditioning, and security systems, among others. I see these elements as a step in the right direction to maintaining the building. Some of the elements are foreign yet relevant to maintain the proper functioning of the building. For example, it would be unsustainable to introduce air conditioning into spaces using timber louvre windows.

Emmanuel Owusu described the library as a heritage building, noting its significance and the desire for it to be maintained with little or no adaption. I, coming from a land management background, preferred the strategy of sustainable adaption conserve the iconic building. Several historical buildings in Ghana are deteriorating faster than facilities managers could ever imagine. Like Sea View Hotel and Old Parliament House, which were both demolished in 2017, the University of Ghana has the option of demolishing any existing structure or redeveloping it. Provisions for building adaptation are usually made at the design stage of buildings, or society pursues building adaptation as a way to solve the deficiencies in the performance of some buildings and their sustainability. The Balme Library to me is a good example of an adaptable structure, and it has undergone several adaptations over time. In the case of the Balme Library, the university chose the option of maintaining the iconic structure while expanding and modernizing it.

Implementation of sustainable adaptation within the Balme Library
Emmanuel, coming from an architectural background, argued that the introduction of new elements to the library distorted the narrative behind the design. I had opposing views, and our discussion drew my interest to find out the reasoning behind the modifications to the building. In my research, I came across the concept of ‘sustainable adaptions.’ According to the Webster dictionary, adaptation refers merely to the ability to fit. In construction, building adaptation can be referred to “as an intervention to adjust any work done on a building above the intention of maintenance that brings changes in the capacity, the function and the performance of the building”(Kabah, 2011). Adaptations are usually made with particular uses or users in mind. Thus, the uses a structure is tailored for, or users of that structure, become the objective for which a model of adaptation may be adopted. The goal of every adaptation is to fit a particular structure for a purpose or use.

During the visit, I noticed a great use of this adaptive approach to improve the physical performance of Balme Library. During our field visit, I noticed the following additions: security installations, power plants, and thermal insulation to reduce energy loss. A benefit of these adaptations is the improved environmental performance of the building. This added value makes the atmosphere of the library more conducive and suitable for student study. I noticed the use of simple yet elegant modern interim design elements in all areas of the building. White, the primary colour of the building, contributes to a low thermal experience. The position of the elements in each section of the library were strategically located to ease movement and accessibility. No wonder one needs to book before getting access to certain spaces! According to Gabriel Atsu, the university reference librarian, the university has had to impose rates to deter overuse and overstay at sections of the library.

I noticed the incorporation of responsive and energy efficient services such as modern sensors and automatic controls to regulate and control the building. Security systems such as CCTV exist in almost all areas. At each entrance, they have modern scanners, which can detect books taken without permission. Gabriel illustrated this using a book he picked from the circulation office. On the first trial, the security system indicating he carried an “unauthorized book.” Just then the security rushed in. Gabriel returned to the circulation room to officially check out his book. On a second try, the system allowed him passage.

I also noticed design extensions and conversions for easier reuse. According to Gabriel, two new extensions were constructed in 2012. These extensions were winged to the original building. The construction blended with the existing structure as it not only used similar construction materials but connected to the old structure to provide ease of access. The excellent result is in achieving structural links by giving multiple flexible-use facilities within a well-planned layout. The library also has a high-energy efficient fabric, is well insulated and with excellent air and rain tightness, yet adequately ventilated to prevent excessive moisture build-up within the structure. The building in some sections uses natural lighting so as to minimise the use of electricity.

Adaptations included extending access. Wooden ramps have been introduced to maximise access to the building for all users especially disabled people to and around the building. Though the ramps do not exist for every area, it is important to acknowledge the progress that has been made. A look at the ramps reveals they are only recent initiative from the university. During our visit, Benedict Acheampong pointed out that the initiative may be a response to the recent passage of The Disability Act that mandated all institutions to have disability access ways. The new extensions had also incorporated ramps.
Heritage features of the Balme library such as the clock have been maintained and adapted for conservation purposes. During the field survey, my team and I tried to understand the architectural meaning of the wall clock. Emmanuel Owusu stated that the clock is of European origin and is mostly found in many European universities to encourage punctuality. A lot of trees and other ecologically important vegetation on the site has been preserved. The vegetation comprises of mainly grasses, palms, flowers and other relevant tree species.

I was curious to hear from other patrons about their experiences about the library. I engaged two students, a man and a woman, in a conversation. From the conversations, they both noted the ease and conduciveness of the Balme Library for their studies. The man commented that the atmosphere within the library was cool and quiet, and thus made concentration easy. The woman said that she loved the library for its elegant design.

Adapting buildings is not just about making them suitable for today’s uses and conditions. It goes beyond only current usage and users to future usage and users. It is also concerned with making them ideal for occupancy requirements and weather conditions in later years. The Balme Library as far as I can judge is sustainably adapted to its users and function. Right from construction, provisions have been made for future extensions and incorporation of certain services. I believe that this approach can be adopted and replicated with other heritage buildings. The Balme Library remains one of Ghana’s most significant heritage sites that is also a repository of Ghanaian culture embodied in its extensive book collection. Concerning future adaptations, the Balme Library Estate managers must develop standards that will conserve vital elements of the structure. 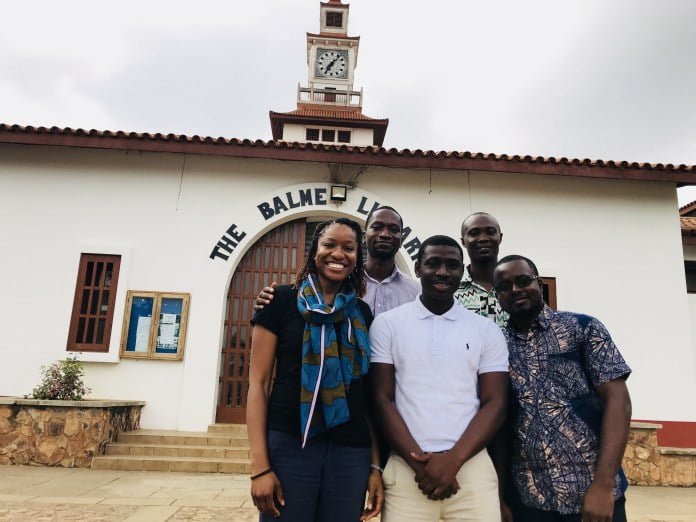 Tags:
Accra, Balme Library, Sustainable Adaptation, University of Ghana
Newer Who is a Spiritreneur?
Back to list
Older Ways of Building an Impeccable Professional Reputation